Posted on February 2, 2015 By finelinetravels

We felt our time in Chiang Mai was up and coincidentally, so were our one-month visas. We’d been there for almost a month and had been getting more lazy and unmotivated by the day. Not that Chiang Mai isn’t awesome, because it is. However, we knew it was time to get back to our non-stop travelling, last-minute booking, motivated selves. Vietnam it is. 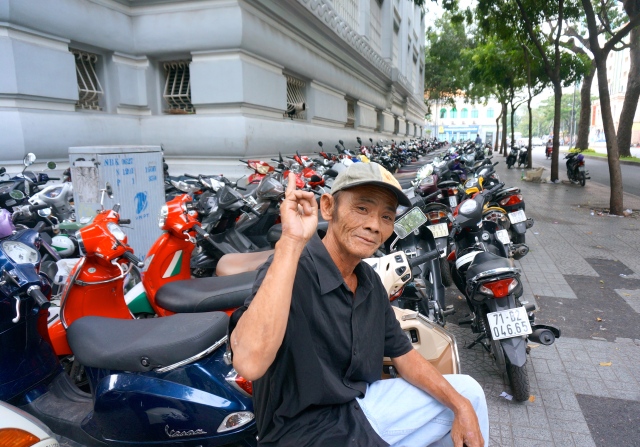 We landed in Ho Chi Minh City, the country’s capital and largest city, where we would spend the next five days discovering this chaotic, and vibrant city that met every one of my expectations for south-east Asia; more motorbikes than people, street food, pollution, smells so bad you can see them, hot steamy weather, large denominations, tiny chairs and plenty of smiling, wrinkly faces.

Unlike Thailand though, if a local in Vietnam is not a fan of you, he or she will let you know. They don’t hold back, nor should they. They’ve perfected the ‘F#@k off’ look. On the flip side, if they are fond of you, expect lots of touching in the form of hugs, shoulder rubs and even a playful smack on the butt. They are just a very honest bunch, even when they want you to spend money, “you buy something” (I know, it’s a lost in translation thing). 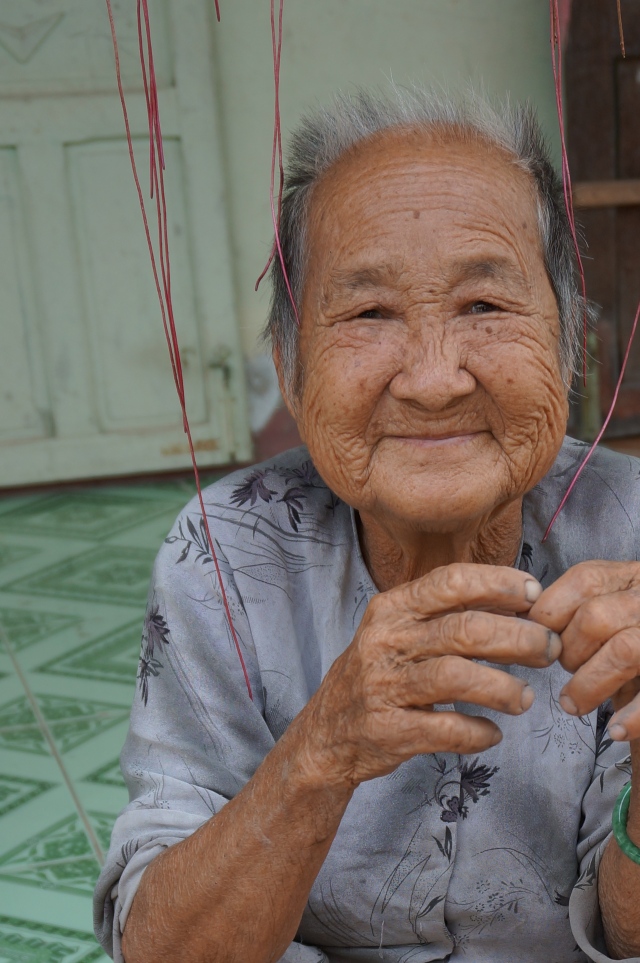 HCMC, or Saigon, is divided into 24 districts with District One being the cultural and business hub, and every other district having something distinct to offer. Our accommodations were in District Two, the home of a local couple, Minh and Yvain with whom we had lots of time to chat and to get the scoop on the city.

We are pros at CROSSING THE STREET

Vietnam has over 30 million registered motorbikes for around 90 million people. This combined with the fact that there are no real lanes on the streets kind of solidified Saigon as the city of organized chaos for us. Despite what appears to be mass confusion in the streets, it works wonderfully. Drivers get cut off left, right, and centre and honking horns are relentless. But the horns are just to let others know you are close to them, they do not represent the road rage that such driving tactics would provoke in North America. We captured one of our street crossings on video (we may have used the jogger as a shield):

All of the above means it is a daunting task to simply cross the street in Ho Chi Minh. It is a challenge for all tourists, and is even a bucket list item for some. You essentially have to close your eyes and step out into traffic. Well, don’t really close your eyes, but you do have to just walk out there. Miraculously, the traffic avoids you like a school of fish swimming around you. Keep walking because if you stop, you’ll confuse them and that’s when accidents happen. We like to consider ourselves pros at crossing the street in Vietnam now. (Note: We are in Kuala Lumpur now and the rules ARE NOT the same. Do not walk out into oncoming traffic. We almost learned the hard way!) 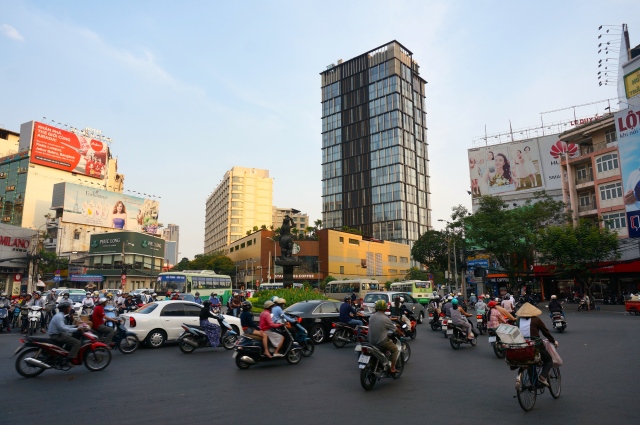 After taking turns getting sick, Jess the first morning (stomach bug) and me later that evening (migraine) and endless discussion as to what caused us to get sick without coming up with an answer, we were ready to explore by day two. First order of business was to try proper PHO. Well first we learned how to pronounce it, then we tried it. It’s pronounced, ‘ph’. Hope that helps! Pho is a delicious, Vietnamese soup with noodles and extremely tasty broth. Pork, chicken and/or beef can accompany it. 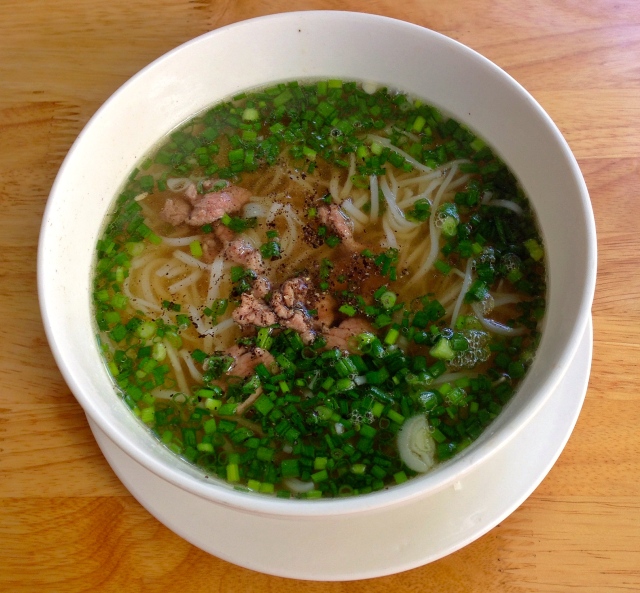 Our pho of choice was at Pho 36. The side of the street eatery in District Two is clean and serves great pho among other Vietnamese dishes. 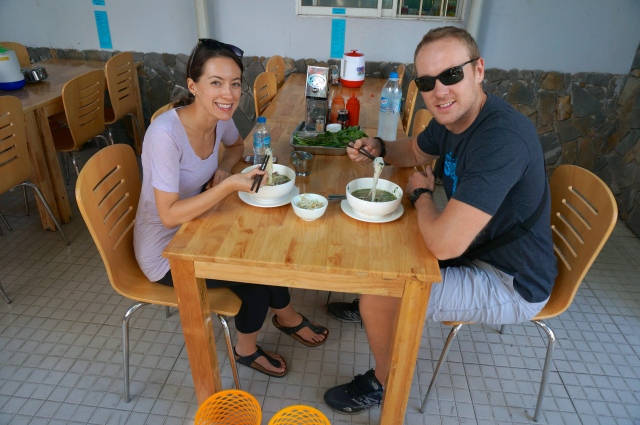 Soup with chop sticks… the broth was a little tricky.

What’s awesome about Pho 36 is that there’s no MSG. I mean they give 20 kg bags of MSG as wedding gifts here so it’s difficult to find a dish without the flavor enhancing white powder.

BANH MI are Vietnamese sandwiches served on a crusty baguette. The type of crusty that scratches the roof of your mouth while you inhale fine crumbs that take your breath away, making you choke a little (like when you eat Purity lemon creams without dipping them in your tea). However, the troubles are worth it because the bread is delicious. My best banh mi came from Banh Mi Huynh Hoa in District One. 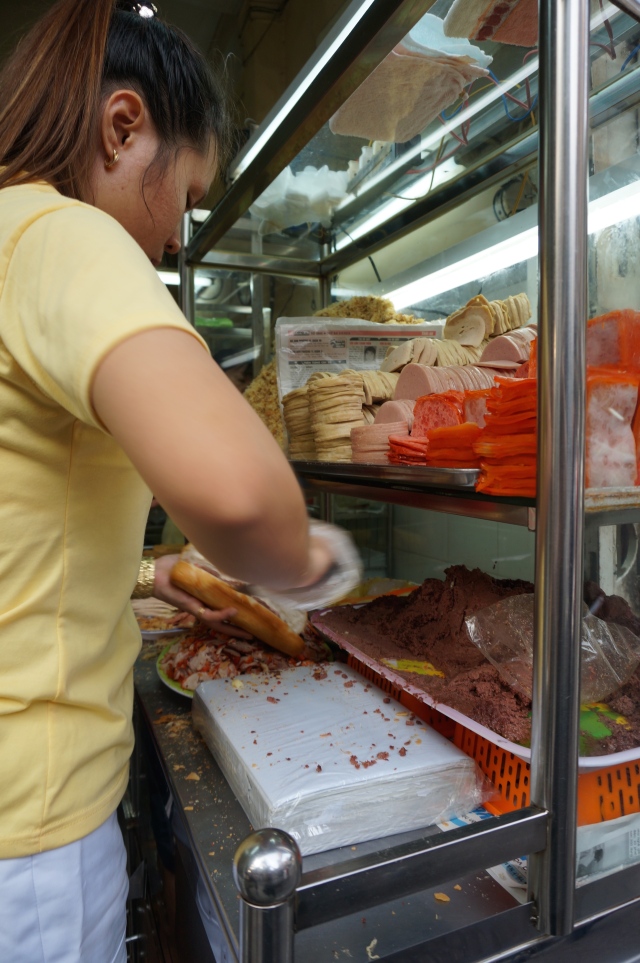 A massive tray of pate and stacks of mystery meats 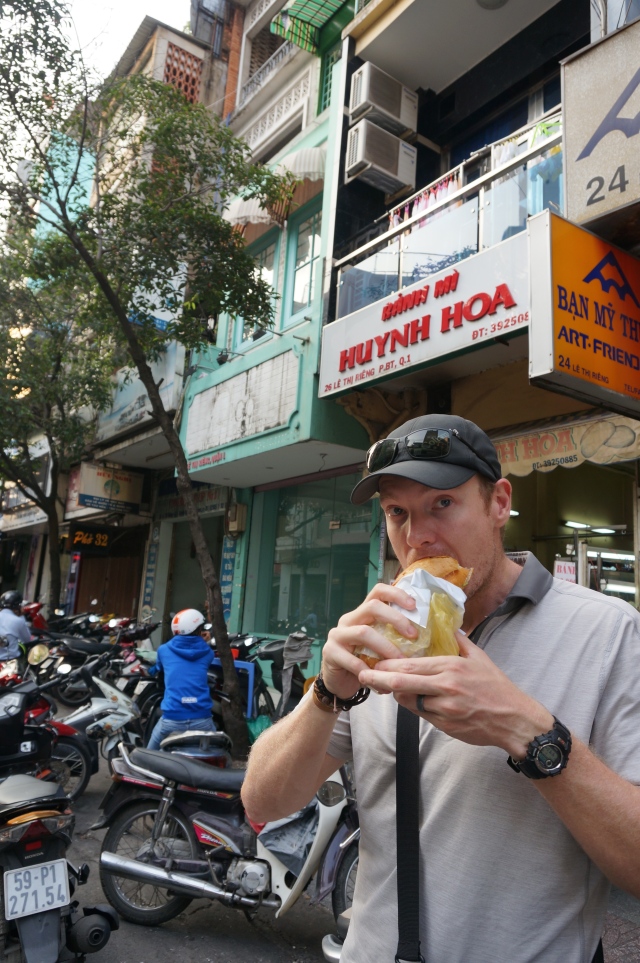 It is easy to spot as there’s a plethora of scooters idling out front waiting for their lunch as well as tourists like us who’ve used the power of the internet to expose this gem to the world, likely to the dismay of those same locals who patiently await their grub. I’ve never had pâté and sweet mayo on a sandwich. Genius combination, yet not sure it will make it to our kitchen. 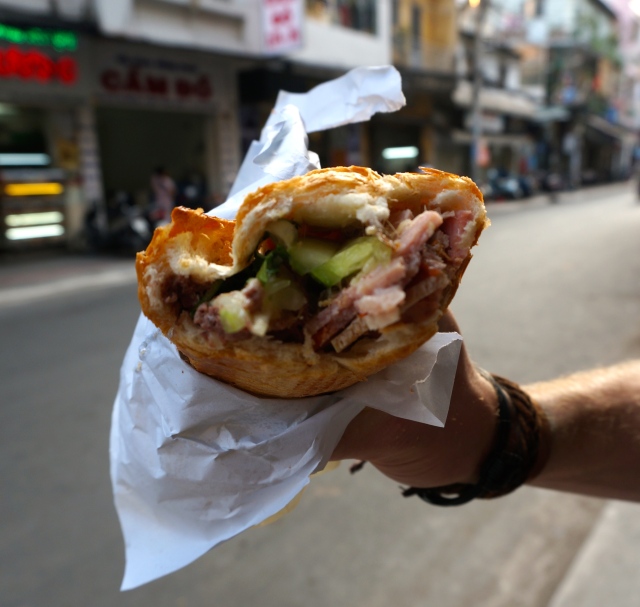 Ms. Tran and her distinct English accent that we won’t soon forget was another memorable dining experience. Her tiny seafood restaurant, Cau Ba Quan, that she clearly has dedicated her life to, offers fresh, local and organic (where possible) ingredients and every dish she’s created herself. Known for some of the best garlic fried rice in the city and her amazing five-colored salad, Ms. Nickie has a great thing going and deserves more attention.

Back on the MSG, she believes that if meats, veggies and spices are combined properly, flavors should pop naturally. Needless to say you don’t have to worry about MSG here. Cau Ba Quan seafood restaurant is located in District One.

Vietnamese coffee is pretty famous, but truth is, its difficult to find a good cup! The locals like it over ice, which makes perfect sense given that temps in Saigon rarely drop below 25 C.

We visited The ‘American’ war museum, or the War Remnants Museum, as we wanted to understand more about the war. We had learned about the ‘Vietnam’ war in school so it was interesting to hear it referred to as the ‘American’ war. We are by no means war history buffs, but some of the actions taken by the American military were shocking to say the least, particularly Agent Orange. I won’t go into it here, so let’s be thankful for Wikipedia, give it a read for yourself. 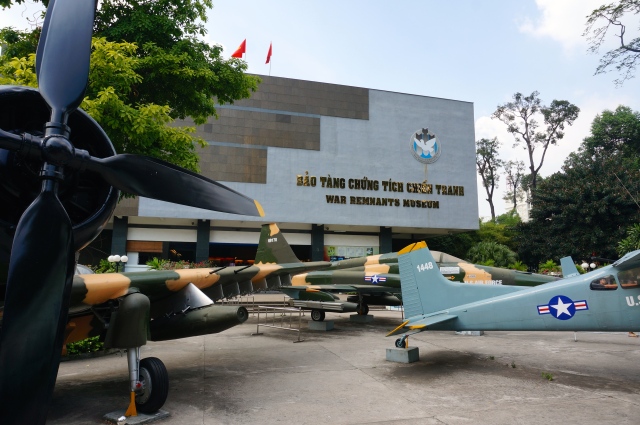 The tallest office building in Vietnam is the Bitexco Financial Tower in District One. Even though it’s a little pricey at 200,000 dong (~$22), I had to go up to take in the views of the city. Mrs. Jessica stayed at ground level and in hindsight, I’d probably have stayed at ground level as well, although I did get some shots. We later found out that the architect responsible for the design also designed the JW Marriott Hotel Hanoi that we recently stayed at!

Now the best part. You can actually go to the cafe on a floor higher than I went to and you just have to purchase a coffee for 100,000 dong. I was informed of this the next day, NOT when buying my ticket! They saw me coming.

Our host’s sister, Hieu, a masters student at HCMC University, kindly offered to take us on a free tour of the city on our second last day which was a nice treat. At this point we’d already covered just about all of District One, but we walked around anyway, hitting all the main tourist sites while getting a local’s view. A little history behind the things we see, always enhances our experience. 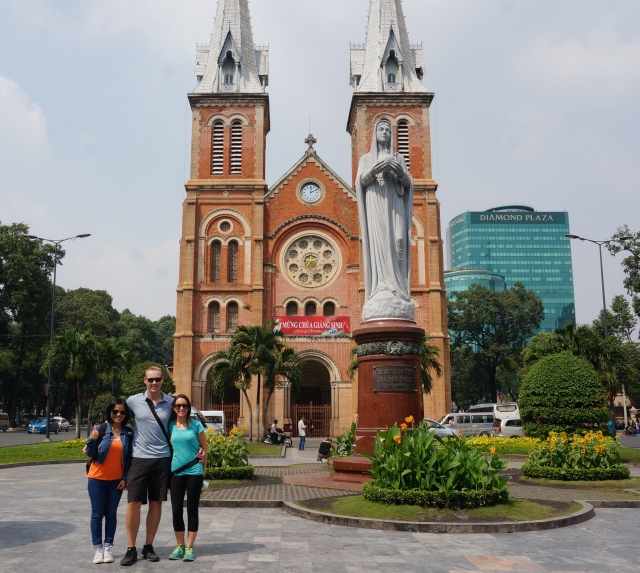 Hieu, Jess and myself in front of Saigon’s Norte Dame Basilica

We learned about Ho Chi Minh himself at the museum dedicated to his life. The Ho Chi Minh Museum is located right next to the Saigon River. Here we read about the impact Ho Chi Minh had on the country and it’s people.

Us at the Ho Chi Minh Museum

Apparently Jess was excited after learning about Ho Chi Minh. So excited that she forgot to lift her feet over the railing on the side of the street, proceeding to face plant on the side-walk. Watching it felt like she was in slow motion, yet I still couldn’t catch her. What a terrible husband. Today, the bruises are gone and we are still married. Happy days.

From the scene of the ‘fall’ we headed to the Saigon Central Post Office. The post office was constructed in the early 20th century and is still in operation today. Here we sent Nanny and Pa a postcard, which they should have received by now.

To get around, we made use of public transit as it was much cheaper than taking a taxi (this is not a no brainer like back home). The bus was an experience to say the least.

I was happy to provide shade for folks waiting for the bus, and we had fun getting on and off without the bus coming to a complete stop. Maybe not the safest practice, but it works. Not sure the Metrobus song would hold true here, takin’ it easy, gonna take the bus.

We managed to squeeze in a tour of the famous Mekong Delta and will have a detailed update on this soon. We will say that the Mekong is definitely worth seeing while in HCMC as we got the chance to get a more ‘local’ experience interacting with those living along the delta. However, the highlight of the tour was meeting sisters, Angela and Clare from Adelaide, Australia. Angela insisted we visit and stay at her house (which just happens to be near the beach!) so we will hopefully be seeing her again in March!

On our last night in Vietnam, we got to meet up with Annie and Ben, friends we met in Chiang Mai. We went to a bar overlooking the backpacker district and got to play some pool!

We had one month visas for Vietnam, which were put to good use. We toured the country from south to north, then south again and found Vietnam to be more authentic than some of the other places we’ve visited in SE Asia. For us. the more authentic, the better.

Next up was Hoi An, the home of lanterns and custom clothing.