Our 5 days in Phnom Penh, Cambodia

Posted on January 13, 2015 By finelinetravels

After getting our first taste of Asian culture in Bangkok, we were eager for new discoveries and were ready to tackle anything Cambodia’s capital, and largest city had to throw at us, or so we thought.

Our arrival and immigration at Phnom Penh International Airport was  pretty smooth considering we’d read that border crossings in SE Asia could be tricky. Arriving by air is pretty basic as long as you have your documents in order. We cleared customs (with our Cambodian visas which were purchased on arrival for US $24) and were out the door within about 30 minutes. Out the door and into the centre of the madness! Scooters and tuk tuks driving in every direction. (Land border crossings may be slightly trickier). 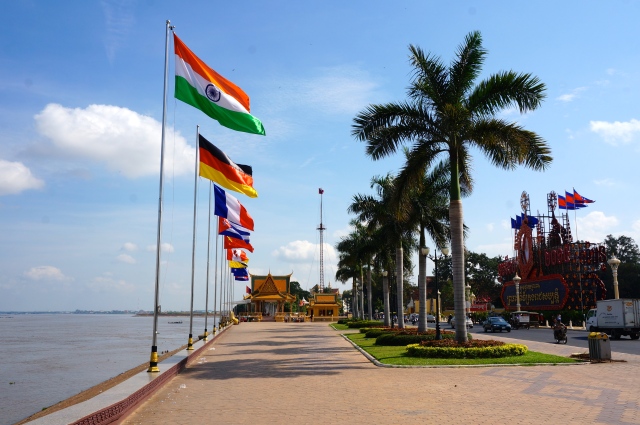 Airbnb was again our choice for accommodations and this time it even included a tuk tuk pick-up from the airport, which was ordered by our host. We stayed in the heart of Phnom Penh, so within walking distance to everything; shops, restaurants, and the riverfront where the mighty Mekong River graces the city.

Our apartment for the week

One of the thousands of reasons we use Airbnb is to experience life through the eyes of a local, and fortunately this was the case in Phnom Penh. Although our host Louise was an Australian expat, she’d been living there for several years and knew all of the ins and outs of the city, and had a deep understanding of its history and people. Not more than five minutes after arriving, we were invited to dinner with Louise and her boyfriend at a local hot spot where I had a chance to try a dish I’d been waiting for my entire life, green beans in a fire ant sauce! They didn’t taste bad, but I won’t go looking for ants in the grocery store when we get home, that’s for sure.

The White Buildings across the street from where we stayed.

In recent years, Phnom Penh has been experiencing rapid growth with high-end boutique hotels and condominiums being constructed, however, traces of the past are still evident with buildings like the famous ‘White Buildings’, an inner city slum that is still home for hundreds of Cambodians, right in the middle of the action.

We covered pretty well all of the city on foot, although we did hail a few tuk tuks. You can get a tuk tuk anywhere within the city limits for $2 US. 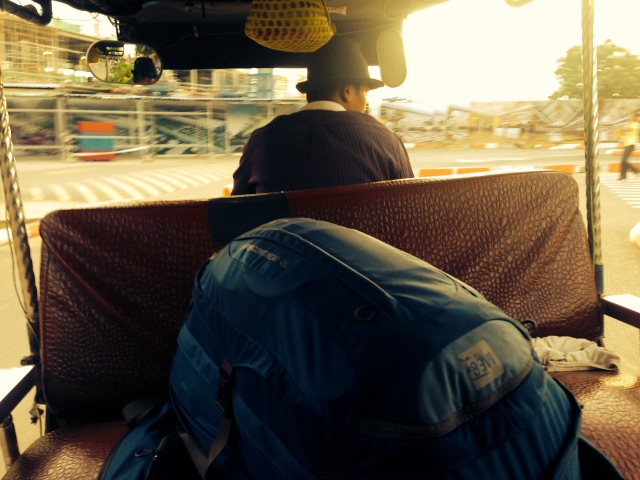 One of our many tuk tuk rides

The Killing Fields at Choeung Ek

Above, I mentioned we ‘thought’ we were prepared for what Cambodia could throw at us. Well, not the Killing Fields. We both were floored to learn the details of these horrific events; and as eye-opening, shocking, and depressing as they are, you should not visit Cambodia, or Phnom Penh, without visiting yourself and gaining an understanding of the brutal history and truly unbelievable events that shape, not only past, but present day Cambodia. Try to be mentally prepared, as this is a no-holes-barred tour. 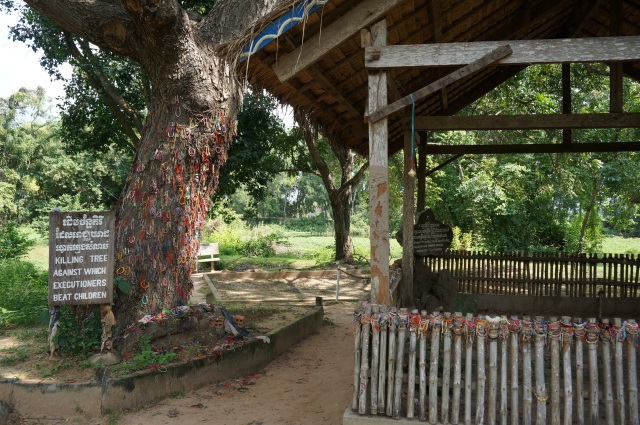 Our host told us to avoid visiting the Killing Fields and Toul Sleng ($3 US per person entry fee) in the same day, as it would be emotionally difficult and a lot to take in. We didn’t listen and wish we had. Although many tourists do both on the same tour with the same tuk tuk driver, as we did, we would recommend visiting on separate days if you have time.

The Genocide Museum is in Phnom Penh proper and can be reached from pretty well anywhere in the city for about US $2-$3. We walked through on our own self-guided tour, but you are able to hire a tour guide if you wish. The photos and stories from survivors of the Khmer Rouge regime definitely left an imprint in our minds. 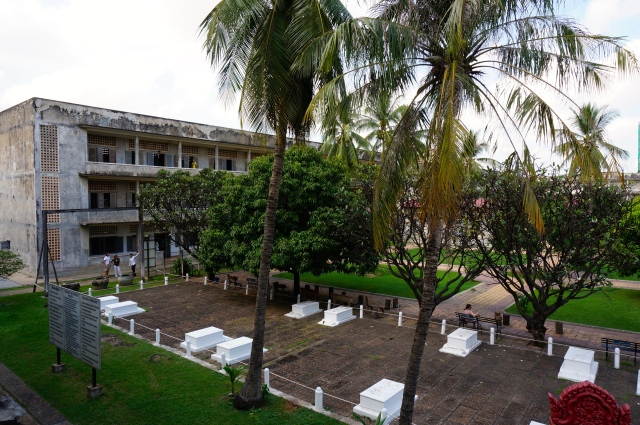 Vann Molyvann is a famous Cambodian architect whose work can be found all around Phnom Penh. Molyvann designed the ‘White Buildings” I mentioned above, as well as the Olympic Stadium which was originally built-in advance of the 1963 SE Asian Peninsular Games, however these games were eventually cancelled due to political unrest in the Country. Today, the stadium is bustling at both sunrise and sunset as locals take part in various exercise programs and boot camps. It is an awesome sight as the rim of the arena is lined with flying legs and arms all in sync with the dubbed over songs from Brittany Spears and other American artists.

Us at the Olympic Stadium in Phnom Penh

Fitness is top of mind here!

Ok so forget the green beans and fire ants I told you about above. Phnom Penh is a foodies’ paradise with every type of food imaginable. Not to mention food is a fraction of the price we would pay at home. Needless to say, we ate a lot!

We really did eat a lot.. and its affordable!

Not only was the food amazing, but we could eat knowing that we were contributing to a good cause. There are several restaurants in the city whose sole intent is to give back by providing opportunities for at risk youth. Restaurants will hire, train/coach/mentor underprivileged or at risk youth and teach them the ins and outs of cooking, running a restaurant and how to interact with customers. Friends the Restaurant is the most well-known, and rightfully so. The food is absolutely amazing with everything thing from traditional Khmer cuisine to deep-fried western favourites. Oh and they have a large selection of frozen cocktails. 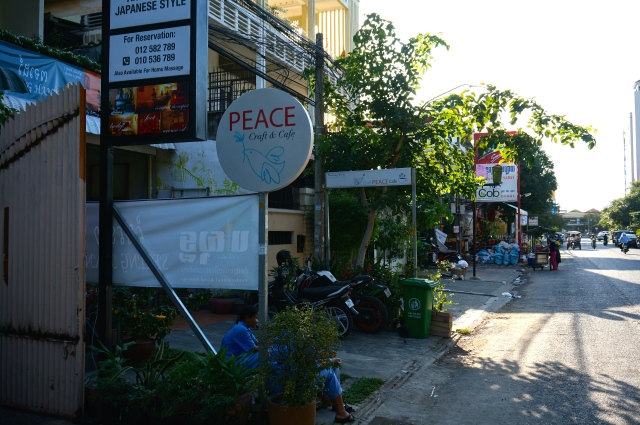 For the most part, we ate at restaurants who supported the development of youth in the community, including Romdeng Restaurant, Bloom Cakes, which offered incredible gluten-free cupcakes, and Craft Peace Cafe. There is an awesome article in the Huffington Post which provides an overview of this great initiative in Cambodia (Click here to read the article!).

As for beer, I cannot give Phnom Penh props here. Although there’s plenty of it consumed by locals and foreigners alike, I can’t say I recommend Angkor, or Anchor to anyone, even though its $0.50 per can.

Cambodia is up there with Bosnia and Herzegovina as one the countries that will have the greatest emotional impact for us on this trip. To witness first hand, the resilience of the Khmer people and to feel the positive vibe given off by everyone we met was truly refreshing. They absolutely live in the moment, something we can all use a lesson in!