Posted on March 7, 2015 By finelinetravels

After spending a week lounging and lazing in bustling Kuala Lumpur, we had a quick stop in Singapore on our way to Indonesia. We spent two days in the city, but after an early morning flight from KL (6 AM arrival), we were completely exhausted. When we reached our hostel (yes, hostel) and checked in, we ended up spending half of our first day catching up on sleep! However, we still managed to squeeze in a lot on day two.

Two words can be used to describe Singapore: SAFE and CLEAN. Reason being, the authorities don’t mess around. Laws are quite a bit different there as some offences like theft are punishable by caning. Yes, the law says authorities can beat you with a cane. The number of lashes depends on the severity of your crime. Needless to say, people don’t fool around in here. Even Chinatown in Singapore is clean and orderly.

It is no secret that we are travellers on a budget, so whenever we can find a free walking tour in a city, we check it out! We decided to go with Singapore Footprints, which offers free walking tours on Saturdays and Sundays that last about 2.5 hours. They are run by a group of students studying Tourism and Hospitality Management at Nanyang Technological University in Singapore.

For anyone unfamiliar with how free walking tours operate, guides make their money from tips. At the end of the tour, usually a bag or basket is handed around for you to anonymously leave a tip. The amount you pay is completely up to you. We usually throw in $10 each. 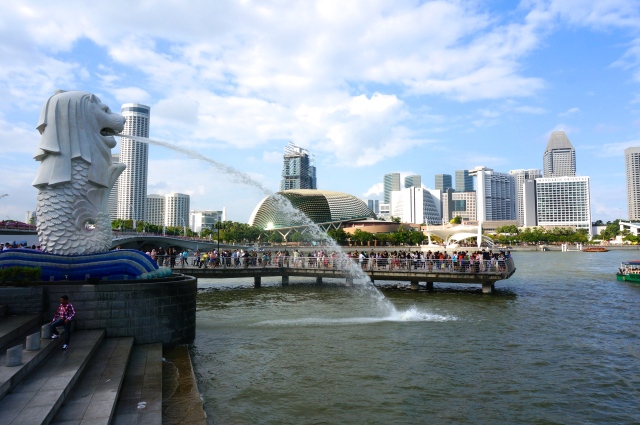 The walking tour started outside Raffles Place MRT station and took us to a number of sites, including the famous Fullerton Hotel and the Cavenagh Bridge, Singapore Management University, ending at the Bugis Street Market.

Like the Petronas Towers in KL, Marina Bay Sands or ‘MBS’ in Singapore is the focal point of the city skyline. The complex is massive and features a nearly 3,000-room hotel, conference center, casino, endless bars and restaurants and a massive shopping complex. It is most well-known for having one of the best swimming pools in the world which is located on the roof, overlooking the city and harbour below. Every evening in front of MBS on Singapore Harbour there is a fantastic light show that draws thousands of people. 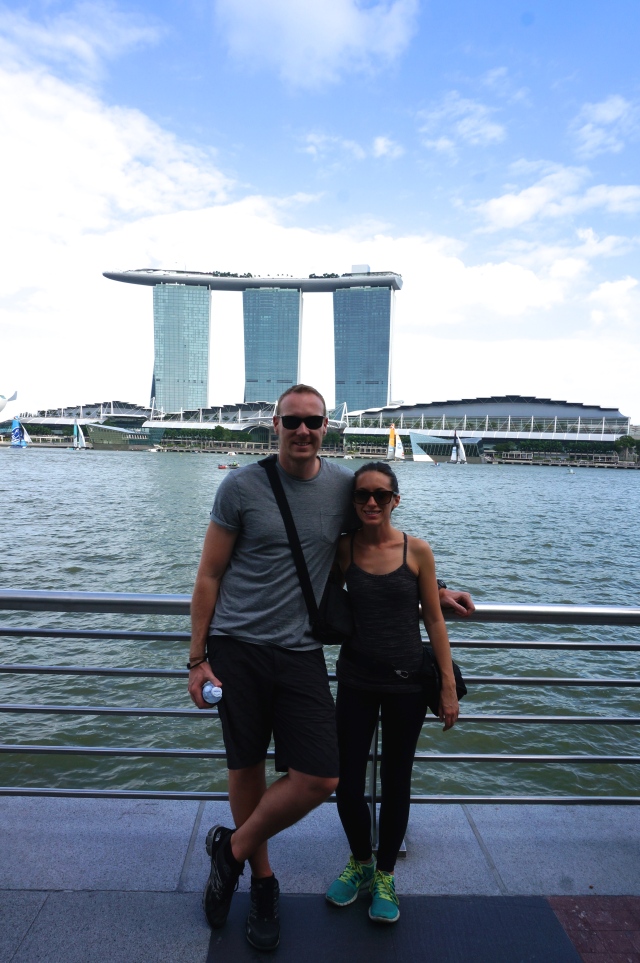 As soon as our free walking tour ended, we hopped on the subway (and by hopped I mean we queued up single file following the platform markings and waited quietly for our turn to board) and headed straight for MBS and the light show. The show didn’t disappoint nor did the view of Singapore’s city center at night. 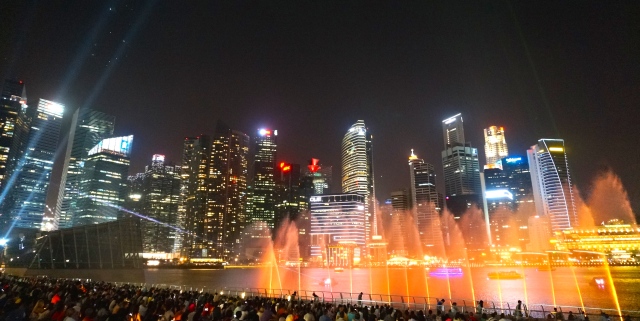 Gardens by the Bay

We’re ashamed to say it, but we didn’t try any of the “local” food while in Singapore, other than the Singapore Sling (more below). After three months travelling through SE Asia, we were craving some western food, in particular pizza; the gluten-free and dairy-free kind. After doing some research, we found Crust Pizza Bar and made it our mission to get there! Not that it is difficult to get around Singapore though as the Subway system is one of the best in the world. Crust Pizza Bar is an Australian restaurant chain, and it did not disappoint. The pizzas were delicious, but much like everything else in Singapore, came with a pretty crazy price tag; $25 per pizza, so make sure you bring your wallet when you visit.

Everyone’s had a Singapore Sling at some point, especially if you’ve done the all-inclusive vacation thing, but I bet not many have paid $30 CAD for one. 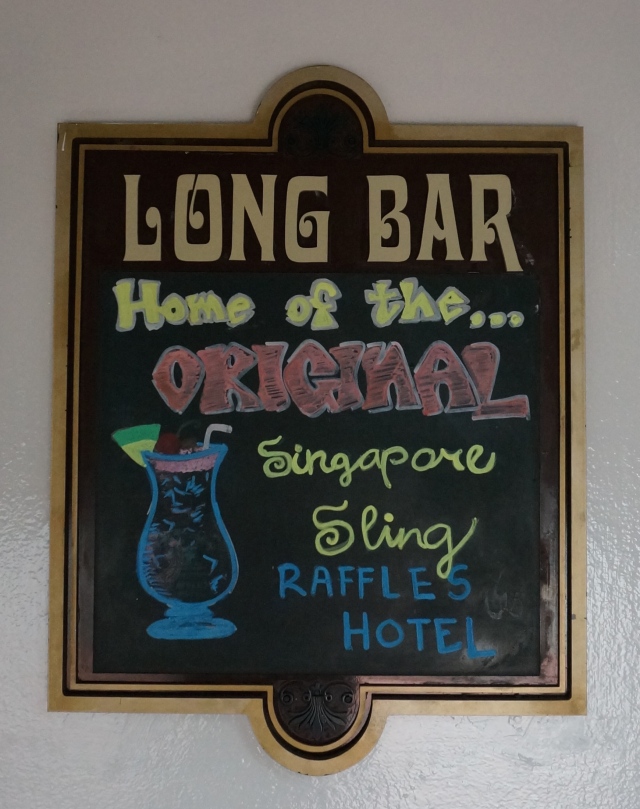 We were suckers and paid it, just to say we had an original recipe Singapore Sling at Long Bar in Singapore where the drink was first concocted. The bar was packed with tourists and every table was filled with ‘slings’. Safe to say Raffles is doing all right! 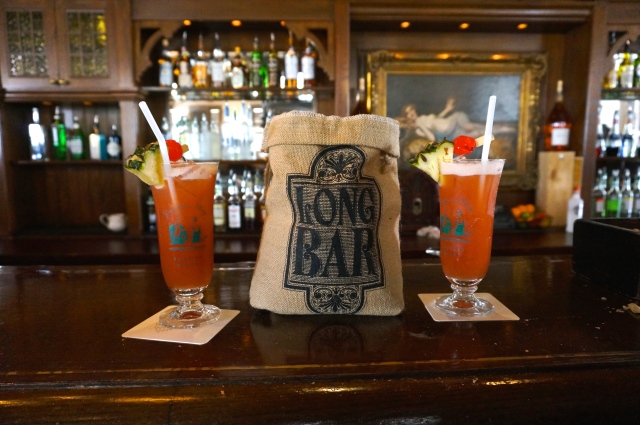 Up to this point, we had managed to make it almost completely around the world without staying at a hostel. Don’t get us wrong, we have no issues with hostels, it’s just that when given the choice of having our own room, or sleeping in a room with a dozen other people, call us crazy, but we prefer the former! During our time in Europe, we found Airbnb was actually cheaper for us than hostel dorm rooms. In SE Asia, guesthouses are so affordable that there is really no need to stay at a hostel. Enter Singapore, where this is absolutely not the case.

Our search for hotels, B&Bs and Airbnb’s under $100/night came up empty so we decided to try searching for a credible hostel. We found the Adler ‘Luxury’ Hostel, and we were able to negotiate a rate of $80 SD for a double bed in a dorm room. It was a great experience and we would definitely recommend staying here on your next visit to Singapore. We saw people of all ages there, from families to business folk.

In addition, the facilities are really nice and clean and the location is smack dab in the middle of Chinatown in the city center. Keep in mind that Chinatown in Singapore is also one of the cleanest and most orderly we’ve seen on all of our travels.

Directly following the light show at Marina Bay Sands, we headed back to the hostel to grab our backpacks before we were off to Changi Airport to await our flight, which departed at 4 AM! Brutal flight time, but luckily our Diners Club card gets us access to the executive lounge that is open 24 hours. In any event, we would be in Bali, Indonesia in just a few hours.

← One week in Kuala Lumpur
Lessons in kindness →

4 Comments on “24 Hours in Singapore”